This evening, we went to the entrance at the other end of the Greenway Path. This end of the path was very different from the other. We parked by these old railroad pillars. 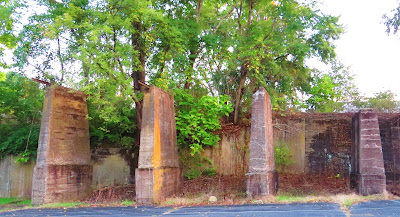 The first thing we saw on the path was a Blue Heron fishing for dinner. 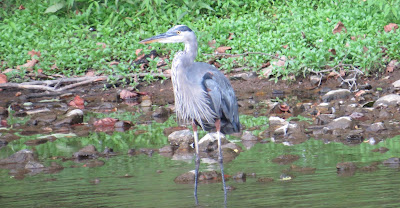 We continued on, under this little shelter. 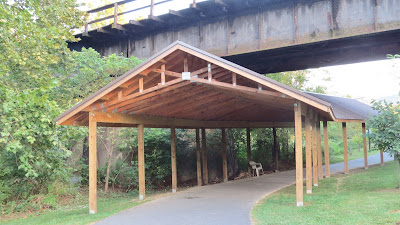 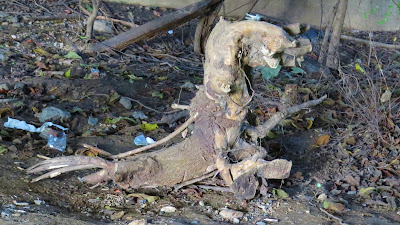 This is where things started to go wrong. This part of the path was right on the river, which was very exposed. 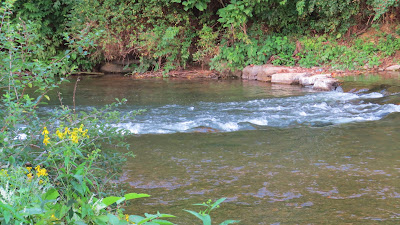 Small flying bugs were swarming everywhere! We got bitten within an inch of our lives! Here is my arm, and Phil's is just as bad. I don't know what they were, so I call them River Gnats. 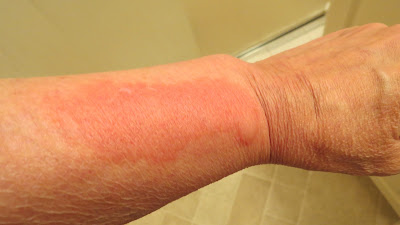 Fleeing the biting bugs, Phil turned my chair around and we headed back to the car. But a slow train was coming on the tracks over the shelter, it was deafening! The tracks were vibrating and it looked like the entire train would come crashing down. So there we stayed till the train passed...getting bitten the whole time! 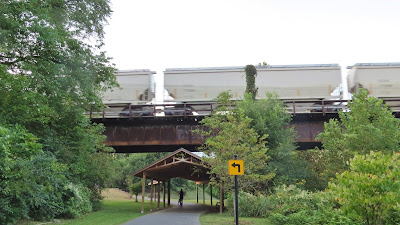 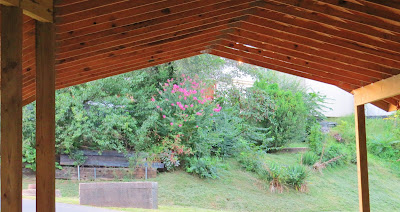 Once we had driven away, we went up on a hill to snap the sunset, while we madly scratched and scratched. 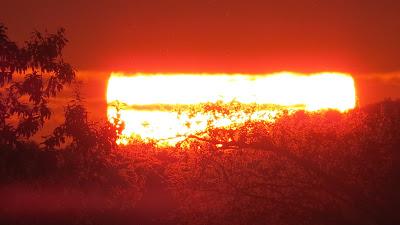 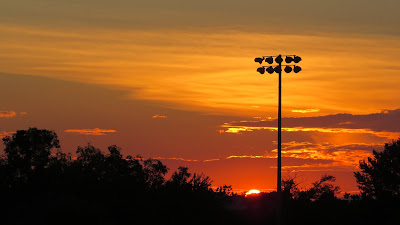 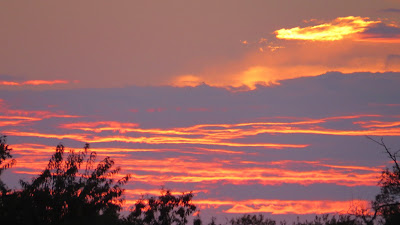 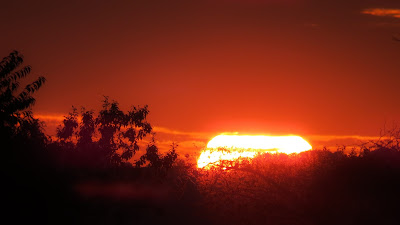 Later tonight, we were sitting on the couch scratching and we heard a loud buzz, like a weed eater. A huge hornet had gotten in the house!!! But that's another story...

“God said to Moses, “Tell Aaron, ‘Take your staff and strike the dust. The dust will turn into gnats all over Egypt.’”
Exodus 8

Oh Dear! How terrible however you did manage to see a glorious sunset to make up for all the scratching`

Aside from the River Gnats, that looks like a nice place. By the picture of your arm, I can tell how bad that must have itched. Beautiful sunset.

Feeling bad that you and Phil got bitten so badly by the bugs. I hope the rashes and itchiness would subside soon. Love the beautiful sunset shots you have taken.

the first thing I do, is click on the photos and go through the slide show, I got to the ARM and had to go out to see what it was. Wow, your beautiful adventure gone awry... we call them no seeums here, tiny gnats that attack when close to water. but I have never had a reaction like yours. rub aloe or ammonia on the bites.. kind of odd to have a shelter under the tracks. the first photo I could not guess what they were until I read your comments... probably a good time to visit is in late autumn before snow and after bugs

Sounds like my week past...wasp sting, fire ants attacking my ankle & to end my week a wood tick!

You had a good view while itching! lol - Gosh your arm looked awful - I am so sorry - and for Phil too - they ought to spray out there. sandie

It sounds as if you need to stick with the end of the path you first visited. I felt itchy just looking at your arm. You did get wonderful photos of the sunset, however.

It looks like a lovely place, but one requiring long sleeves and one of those hats with a screen covering your face. So sorry about all those bites. As always though, such lovely photos. You live in a beautiful place.

Sorry to see that you got bitten Ginny, you must both taste nice, lol
Tom is a magnet to midges but they seem to leave me alone, I wonder why?
Let's hope it soon gets better, don't scratch it though, you don't want it to get infected.
Briony
x

Mercy you two really got a good attack. Trust it is not something that will cause infection. It is easy to say, but the less you scratch it, the better off you will be.

Oh my goodness! That looks nasty and even painful. Too bad, you could not just enjoy the scenery.

Down To The Bone

In our neighborgood, skeletons are EVERYWHERE now. You really cannot go even one block without seeing at least one. I actually kind of like... 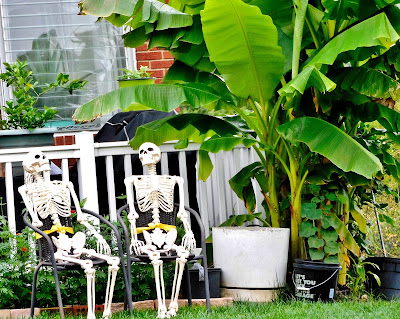