The Little Bike That Could

This old broken bike laid on the side of the road. One wheel was missing, and the other wheel was laying on the ground. Then someone put a pretty wreath on it. 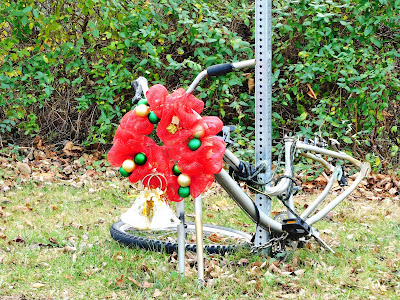 Next time we drove by, someone had added a big gold star. 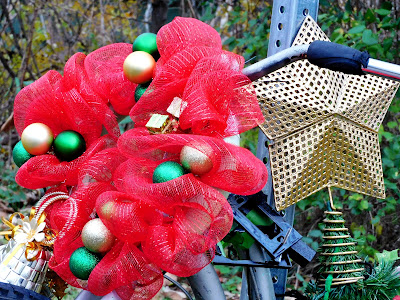 Sortly later, a big green wreath-type decoration had been added. So it has turned into a frame for decorations. The little bike that could. 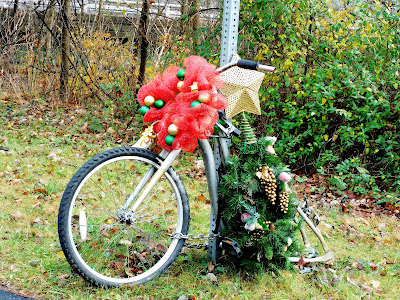 "The bicycle is the most civilized conveyance known to man. Other forms of transport grow daily more nightmarish. Only the bicycle remains pure in heart."

This is truly a neat thing. I enjoy seeing things like this. It only takes one person to spread joy before others join in. {Heart this}

How cool is that. Whoever started it off with the red wreath had a good idea.

my first thought was it looks like the bike was hit and warped around the sign, that this might be where and accident happened and people are leaving these items as a tribute. search your town for a story.

That made me soooooooooooooo happy - keep us updated if there is more put on there.

That is so cool. Love when things like that happen!!

That's great! I love this.

I have been out of touch for a while with so much going on in my life and I was lost because of my illness but I'm stronger and I am here to tell you about a natural remedy that is guaranteed to make you wonder why your doctor didn't tell you about it. Then, on the other hand, it is pretty obvious why your doctor didn't, because that's not his job, is it? But, seriously, promise me you won't get too angry with your health practitioner, it's really not their fault. They can only practice what they're told to practice, right? When your health is at risk there's no time for Tom foolery, you've got to get down to the cause and nip it in the bud. So you've been suffering from painful gout attacks have you? Well, allow me to give you a new perspective on the solution to what plagues you I was once in your shoe until my college friend introduce me to Dr Itua herbal center which cure my hiv/herpes,Lymphedema, after drinking it for two weeks as instructed, Dr Itua is an africa herbal doctor who has natural power to cure all human illness diseases I believe Dr Itua so much because he help me cure my hiv/ herpes which has being my burden in life so I promised Dr Itua that I will testify about his work online after curing me and that is what I'm doing here so please if you are sick from those diseases do not hesitate to write Dr Itua Herbal Center On Email: drituaherbalcenter@gmail.com Or chat with him on his online store www.drituaherbalcenter.com

Well that is nothing if not inventive! xoxo

Today we drove past an apartment that I have posted before because they usually have all kinds of decorations out front. But today all they ... 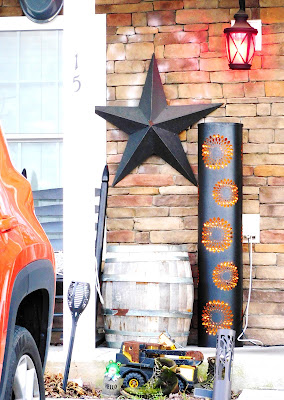