This is a re-post from last year. Because I have found something like the knife angel, almost as cool! But you will have to wait till my next post to see it:


The star attraction of the National Ironworks Centre in England is called “Knife Angel.” It’s a towering, poignant tribute to lives lost by knife violence. 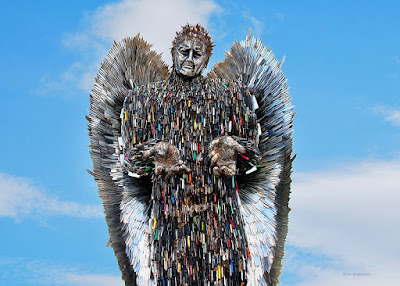 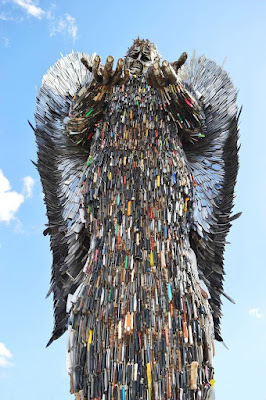 The Knife Angel stands 27 feet tall and is made of over 100,000 knives. The knives were collected from police departments in England. Thirty percent of the knives used in the sculpture were bloodied on arrival and came in biohazard bags. 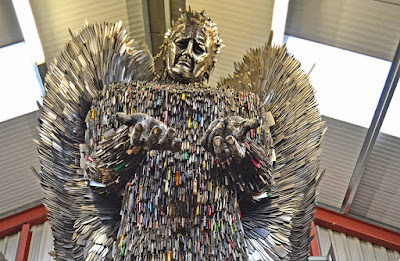 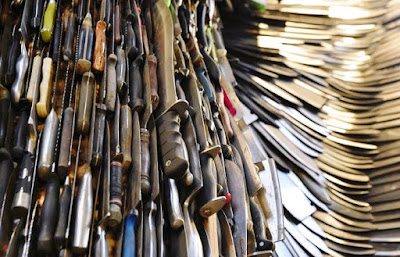 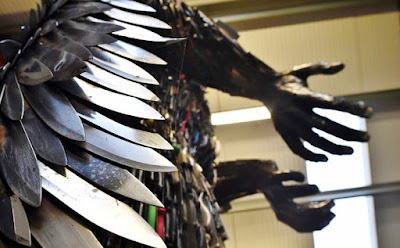 It was constructed to raise awareness about knife crime. Alfie Bradley, the artist, disinfected and blunted the weapons before welding them to form the angel. Families of those lost to knife violence can engrave a message onto one of the sculpture’s many thousands of blades. 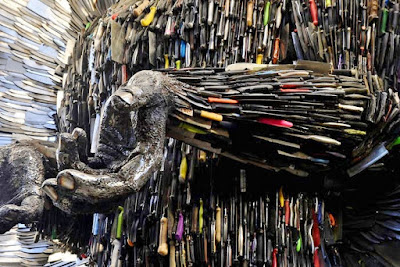 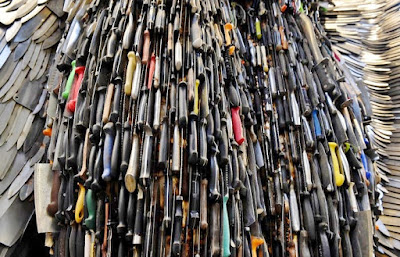 All pictures are from the web.

"For men who think a woman's place is in the kitchen, just remember, that's where the knives are kept."

Knives are useful tools but can be very dangerous too when misused. Have a blessed weekend!

WOW! That is quite a statement. I hope you have a wonderful weekend.

This is an odd piece of work tho a meaningful one. Yet, for me, it represents too m much violence in the world. An angel depiction is wrong...just my opinion.

So these are the actual knives that were used in violent acts? The sculpture itself is amazing, what it represents is is rather mind boggeling.

before I read the words, I thought that is one scary looking angel. after I read the words you wrote I thought, it is appropriate that the angel looks scary and it is more like hurt than scare. it truly is an amazing work of art and so very sad. UK has knife violence we have gun violence. now I am picturing a gun angel... I know the angels are crying over all the violence

Here I am living in the UK and I did not have a clue about this 'Knife Angel'
It's a wonderful work but will it stop the violence.
As you know my Grandson lives and works in the East End of London and stabbings are frequent. After having his phone stolen it's worrying Ginny.
What is happening to our wonderful world, we didn't have stabbings like this when I was a young girl.
Briony
x

Oh this is a very sad angel. Too much violence in the world.

Beautiful and sad at the same time.

It is a sad commentary. I know when the population changed that knife murders really increased sadly.

It is sad to think about knives - I am glad that there is a memorial to these people. It is sobering to think about them killing someone. I do like the quote tho. sandie

Truly mindboggling!
What a reminder...How very sad...
Love the quote too.

It’s sad to think that these are weapons used against humans.

I saw pictures of The Knife Angel on my friend Sheilagh's page on Facebook and was so interested in it. Thanks for sharing the details.

Amazing and a vivid reminder of some families loss of loved ones. Then I read the quote and cracked up.

Oh my, that's both mind boggling. So much violence. That's a lot of knives.

Since this was the first day of december, I thought I would do my yearly Christmas decorations post. Just a lot of little things really. No... 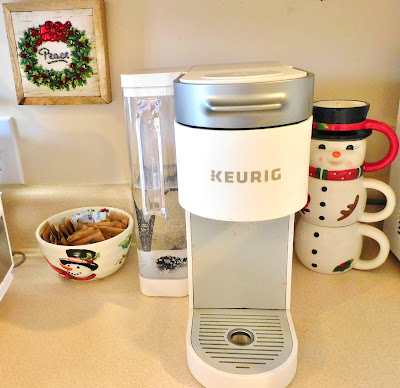