The Stars Of The Show

After all these posts abut the Poinsettia Festival, here they finally are! People were buying so many that they were wheeling them out to their cars in wagons!  This was the big Poinsettia Tree. 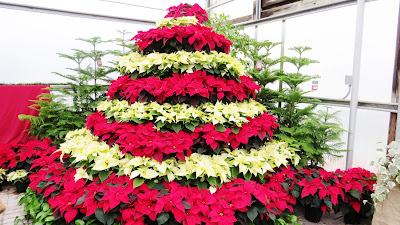 This ran down the center of the craft room. 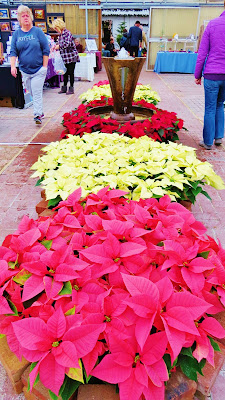 Tiny baby poinsettias! I would have bought a couple, but they are poisonous to cats. 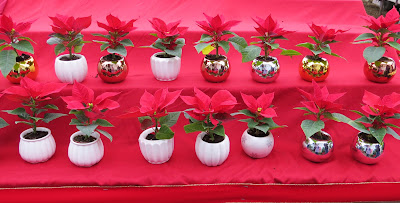 This grouping was around a fountain. 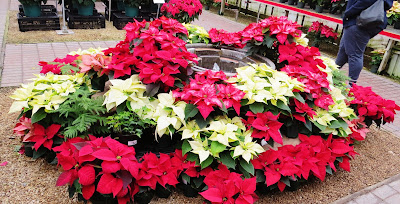 This is called Sparkling Punch 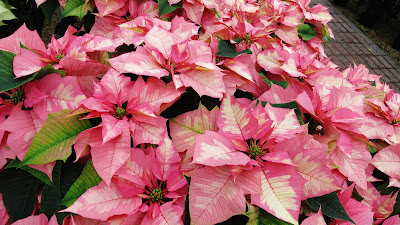 This is Orange Spice 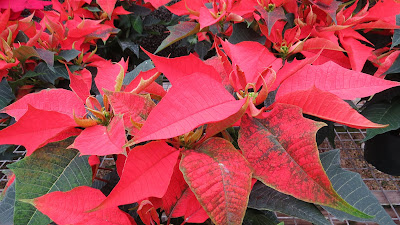 This is Ice Punch 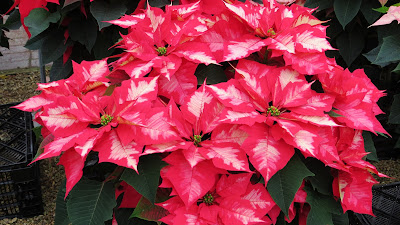 And I did not see the name of this kind 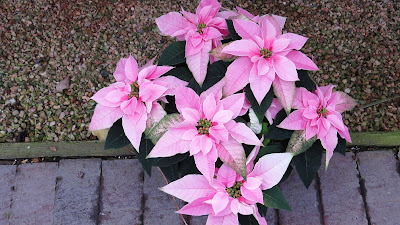 I did not expect to buy anything, but I did. I could not resist it! What do you think it is? I will show you on my next post!

The Legend of the Poinsettia
The legend of the poinsettia comes from Mexico. It tells of a girl named Maria and her little brother Pablo. They were very poor. Each year a large manger scene was set up in the village church, and the days before Christmas were filled with parades and parties. The two children loved Christmas, but were always saddened because they had no money to buy presents. They especially wished that they could give something to the church for the Baby Jesus. But they had nothing.
One Christmas Eve, they set out for church to attend the service. On their way they picked some weeds growing along the roadside, and took them as their gift to the Baby Jesus in the manger scene. They were teased by other children when they arrived with their gift, but they said nothing for they knew they had given what they could. Maria and Pablo began placing the green plants around the manger and miraculously, the green top leaves turned into bright red petals, and soon the manger was surrounded by beautiful star-like flowers and so we see them today.
From that day on, the bright red flowers were known as the Flores de Noche Buena, or Flowers of the Holy Night, for they bloomed each year during the Christmas season.

What a beautiful story - I am glad the k ids didn't tease them. The flowers were beautiful and looked like spring in winter!

In old Mexico the poinsettias along the roads/highways are TREES. How I wish I had a tree like that. These in America are hybrids of the ones in Mexico. I love 'em. Your purchase? My guess would be an ornament.

These are all beautiful. I enjoyed reading the legend of the poinsettia. I'm with Anni, I think you bought an ornament.

love the poinsettia story and have never heard it before, also did not know they grow wild in Mexico and as big as trees.. great post. I think you bought one of the wall hangings that were hanging all over the wall over the poinsettias in yesterday post.. this tree is like the one my niece had for her Christmas eve wedding, the first photo is what I mean. I have photos somewhere but they are not digital and no idea where they are.

Thanks for sharing these beautiful poinsettias and the legend.

I had not heard the legend...I love it. And they are beautiful!

OH! My eyes are full of Christmas.

A beautiful story, Ginny, I love Poinsettias and didn't know there were so many different varieties, especially the one I received that looks like a rose! I think you chose the ice Punch, it is so pretty, thank you for visiting and for your sweet comment.
Blessings,
See

What a great festival. Poinsettias are beautiful and I enjoyed seeing many different kinds! I have no idea what you got and look forward to finding it out on your next post :-)

Oh Ginny, how gorgeous! And I loved the story too! Yes, most people aren't aware that poinsettias are poisonous to cats. I think of this every time I see one. Thank you for mentioning that. Love, Andrea xoxo

I never heard the story but we often call them 'julstjärna' = Christmas star here. I bought a small one for my kitchen window this year. One I bought a couple of years ago grew to be really big. I never get them to grow red top leaves again though (the light conditions have to be just right for that, I know)

Oh my....so many gorgeous colors of poinsettias. I purchased some today..... They just add to the Christmas spirit....

Gorgeous! I love these plants, but have seldom had one in the house. It's just that I choose not to buy them for myself.So I can't complain.

So pretty!! I have banks of poinsettias - all fake! They die so fast when I buy them real!
Love your blog background! You are so creative!

I love poinsettias and these were so lovely. And thanks for introductions to new-to-me varieties.

Wednesday was the first day of Astrological Autumn. But you would never kow it by looking around. It has remained very hot, and things are ... 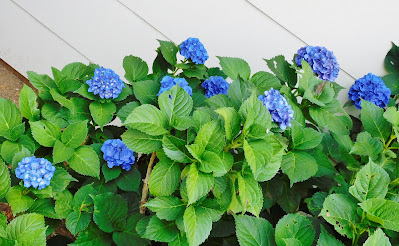